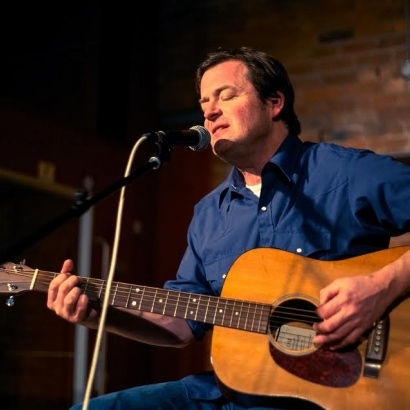 “Thanks for coming out on an awful dirty night,” Willy Vlautin tells the crowd who braved the Manchester weather to fill the International Anthony Burgess Centre to capacity. It really had been throwing it down, but everyone's enthusiasm for meeting Willy Vlautin, author and frontman of American band Richmond Fontaine, had in no way been dampened. MLF and the Burgess Foundation teamed up to hold the event on January 31, which combined a solo acoustic set with a reading from Vlautin’s fourth novel, The Free.

Born and raised in Reno, Nevada, Vlautin started playing guitar and writing songs as a teenager. Richmond Fontaine was founded in 1994 and went on to release nine albums and achieve critical acclaim as one of the best alt-country bands to come out of the states in the past 20 years. It’s no surprise at all when Vlautin tells us “a lot of his stories have grown out of his songs” – the Fontaine lyrics are short fictions themselves.

Not many musicians have made the transition to literature as successfully as Vlautin has. Previous novelsThe Motel Life (2006), Northline (2008) and Lean on Pete (2010) earned him an impressive following among fellow writers, with fans including Donna Tartt, Sarah Hall and George Pelecanos.

When asked about his successes as a writer, Vlautin remains humble saying “I create stories about ordinary people and the struggles they go through.” Vlautin tells us he has always been “attracted to what scares me and after growing up in a right-wing community where even if your views were middle of the road, they would put you in your place; there is nothing more scary than trying to discuss the rhetoric and the heated debates of America. The Free is partly about the health care system because I was so angry about it but, also because I had grown scared of it.”

Writing The Free was also a technical challenge for Vlautin, weaving muiltiple character narratives together. “I’ve always been reluctant to write books featuring multiple stories. All the time you are reading, you imagine the writer being too clever for himself, sat in a turtleneck jumper.” he says with a laugh. “I never wanted to be imagined in a turtleneck!” But on days when the challenge of his creative process becomes too much, Vlautin has a trick up his sleeve: “If I’ve had a bad day writing a song, the I content myself with the fact I’m an author. When I’ve had a bad day writing the novel, well, I’m just the front man of a band dabbling with a pen.”

In his reading of a section of The Free, Vlautin’s warm American drawl conveyed a lovely sense of place and his performance was effusive and stirring. In fact, Vlautin is so pleasant to listen to, he has already been asked to read for the audio recordings of the novel and is making plans to read more besides. “Totally addicted to audio books,” he says.

After a short break, Vlautin returns to the stage with his acoustic guitar, and delivers a short set of songs, new and old, which transfixes us. He tells us what he has learned is that “the gift of writing is not performance, it is perseverance.” It seems to me he has struck the perfect balance between the two.

About the writer: Emma Nuttall is currently working toward an MA in Creative Writing at The University of Manchester. She writes for Creative Tourist and Manchester Confidential and in her free time enjoys a spot of nose pokery around the MLF offices