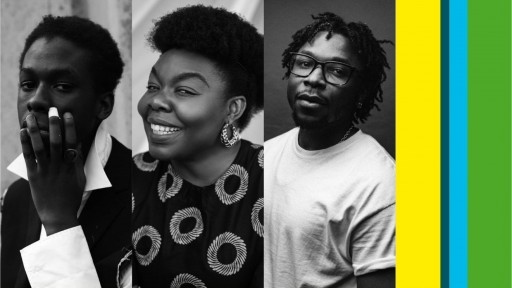 Join us for an evening of poetry and music reflecting on the theme of such a time as this. Special guests include Nigerian British poets Tolu Agbelusi and Yomi Sode. Tolu’s stunning collection Locating Strongwoman (Jacaranda) explores the unperformed self, womanhood, and the art of living. She is also a human rights lawyer and the founder of Home Sessions, a poetry development programme for young Black poets. Yomi has performed his work, including solo show COAT, internationally and his play and breathe… enjoyed a sold out run at The Almeida earlier this year. His first poetry collection Manorism is due from Penguin in 2022. There will also be music from up-and-coming vocal artist Shola Mcleod and new work from the Manchester based collective Young Identity. Hosted by Shirley May and presented in partnership with St John’s Church.

Shirley May has performed locally and internationally, appearing at the Nuyorican Poets Cafe in New York and the Calabash writing festival in Jamaica. She's the CEO and founder of Young Identity and her first poetry collection is She Wrote Her Own Eulogy.

Nasima Begum (aka Nasima Bee) is a performance poet, producer and creative practitioner. She was recently an artist in resident for Belgium’s Museum Nacht and is currently working on an audio commission with New Creatives North entitled Salt.

P. A. Bitez is a British Jamaican-born Nigerian poet, songwriter, musician, filmmaker, and actress. In 2017 she won Slambassadors, a national poetry competition, and published her debut poetry collection Soft Tortures. In 2020, she became one of the six finalists of BBC Words First.

Saf Elsenossi (SAF-S2E) is a performance artist and rapper based in Manchester. He is one of 6 winners of BBC 1xtra’s Words First to perform at Contains Strong Language. You can read his work in No Dis CLAIM.

Roma Havers is a Manchester-based queer poet and theatre-maker. Her first solo show Bolted – about agoraphobia – debuted with UKYA in 2019, and her second solo show LOB – a tennis poetry bonanza – has been made into a film for Queer Contact 2021.

Isaiah Hull is a noir maker from Old Trafford. He has performed alongside Kae Tempest, Saul Williams and opened up for Skepta. His debut poetry collection is Nosebleeds.

Katia Kennedy has performed at and produced several spoken word nights across the city including the live-streamed One Mic Stand slam. Her work was recently published in the Ecosystems of Fury anthology.

Louis Registe has contributed to various slams, writing projects and theatrical productions, both in and out of Manchester. He is writing under Nine Arches Press for BBC’s Words First, a development project which showcases the UK’s emerging artists in poetry and spoken word.

Lauren Temple has performed at events such as: Distant Libraries as part of Manchester City of Literature's Festival of Libraries, One Mic Stand, and International Women's Day at Manchester Central Library.

Reece Williams is a poet, theatre producer and racial equality campaigner from Manchester. He has performed alongside the likes of Saul Williams, Kae Tempest, The Last Poets and the late Amiri Baraka.