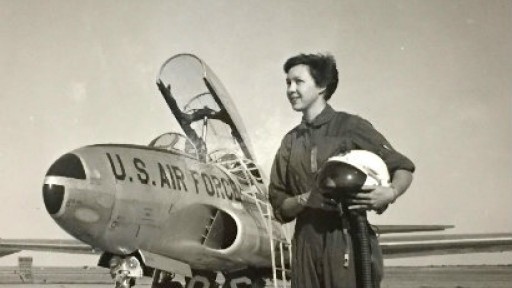 Unfortunately, Wally Funk is recovering from surgery and unable to fly to the UK for her book tour. Our event will still go ahead with her biographer (and Spaceboffins podcaster) Sue Nelson giving a talk about Wally and the Mercury 13 with photos and video footage. Any customers that would prefer to get a refund for the event should contact Quaytickets box office with their booking details on 0843 208 0500 or email: info@quaytickets.com

In 1961, Wally Funk was one of the Mercury 13, the first group of American pilots to pass the ‘Woman in Space’ programme. Her scores in the rigorous mental and physical tests beat many of the male candidates, including John Glenn, the first American to go into orbit. But just one week before Wally was due to enter the final phase of training, the programme was cancelled and none of the Mercury 13 ever flew into space. Undeterred, Wally went on to become one of America’s first female aviation inspectors and civilian flight instructors, but still dreams of becoming an astronaut. The author of Wally Funk’s Race for Space, Sue Nelson is a broadcaster that presents and co-produces the award-winning Space Boffins podcast. Her documentary Women with the Right Stuff was one of the BBC World Service’s most-listened-to podcasts.